This week’s journal will be about a beautiful sunrise at lake Bled. Ojstrica is one of the most popular locations to take photographs of Bled and many postcards and posters were made on this exact spot. A dear friend of mine once showed me this location and I decided on the spot that I just have to capture a sunrise from here. I visualized the light and how it would first lick the mountain top and then progress slowly towards the castle and the church.

It was crystal clear that morning when I checked the weather conditions and it looked like I would have perfect light to take some nice images of Bled. But as I arrived in the vicinity of the town the fog was so thick I could barely see anything. I was dissapointed at first, but soon realized that if Ojstrica is above the fog I could get some spectacular shots. Especially if the fog would slowly lift at the sunrise (which fortunately it did). I made it to the top just before the magic started to happen.

I was thoroughly impressed by the view, it was like a painter would constantly change his mood. Fog was dragging over the countryside and at times it seemed to me that through the white veil I can see the outlines of the church. Just a moment later it seemed like a blurred illusion. Over and over again, until the “painter” finally revealed his picture.

Timeline of the beautiful Sunrise at Bled

The castle lights were still lit and I quickly took the first photograph.

I love the feeling of serenity in this image as I was patiently waiting for the action to start. Suddenly the castle lights went out and the top of the bell tower appeared out of the fog. A mystical moment indeed. 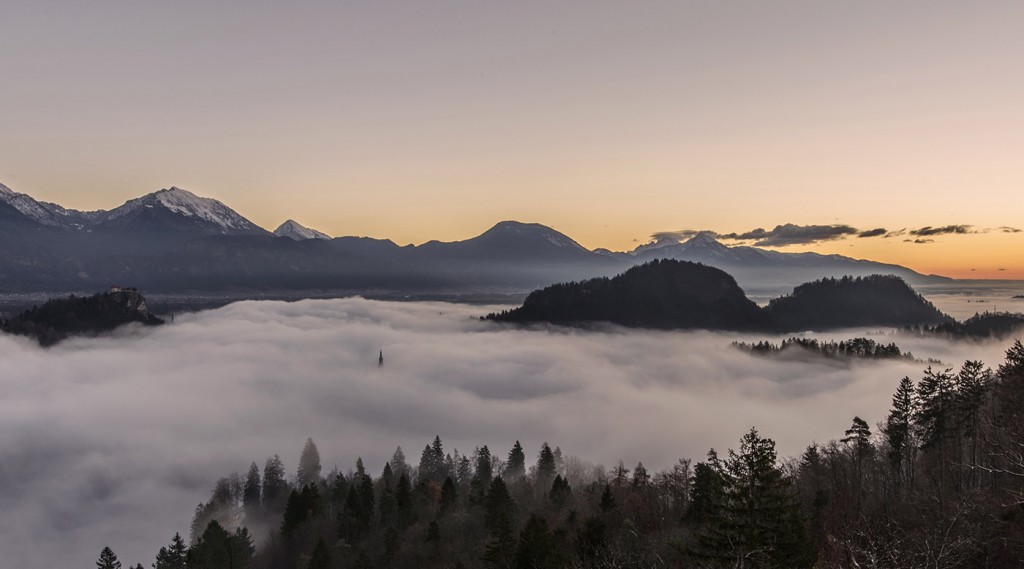 It was just as I imagined it. Mountains, castle and the church are basking in the morning light as the majority of the landscape is still in the shade.

Photographs below really capture the warm atmosphere as the sun slowly lit up the countryside. 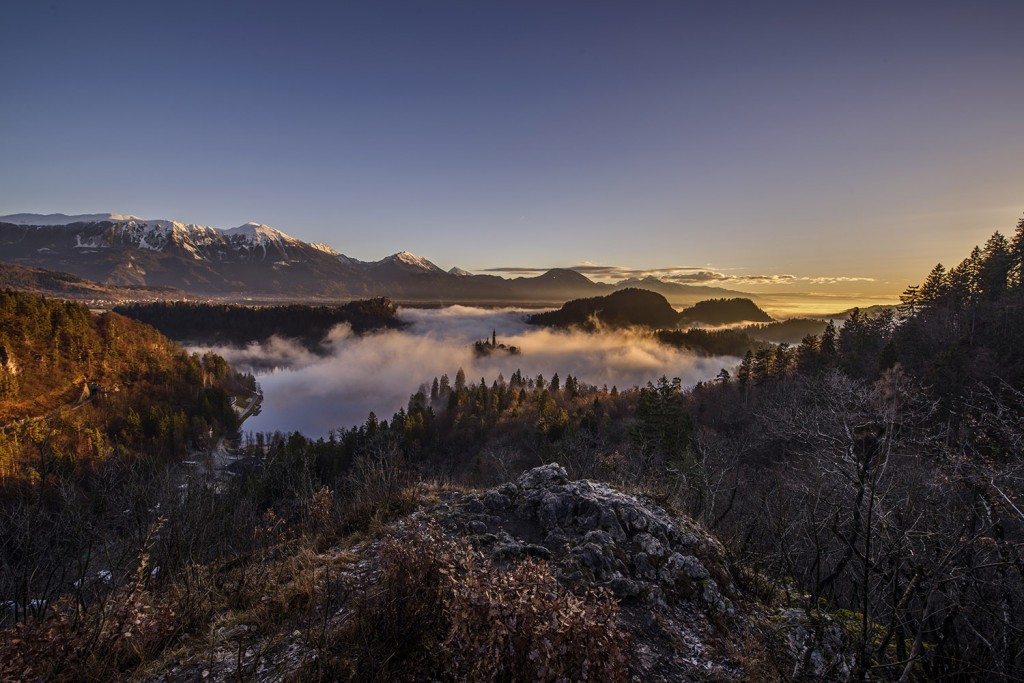 Everything was happening really fast at this point, light and fog were constantly changing the view and the atmosphere. I was shooting like crazy in the desire to capture as many images as possible. 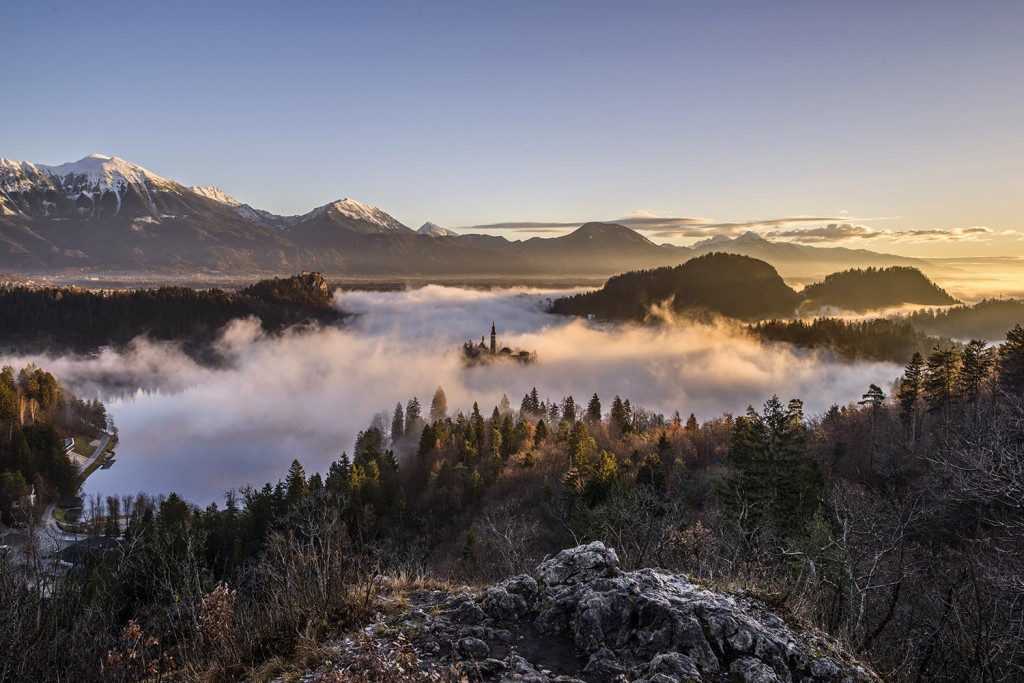 The golden hour in all it’s glory. Photographs below are my favourites, with the autumn forest nicely lit up.

A different point of view is always a nice touch. Imagine how it would be, just sitting there and observing how the fog unravels its mysteries. 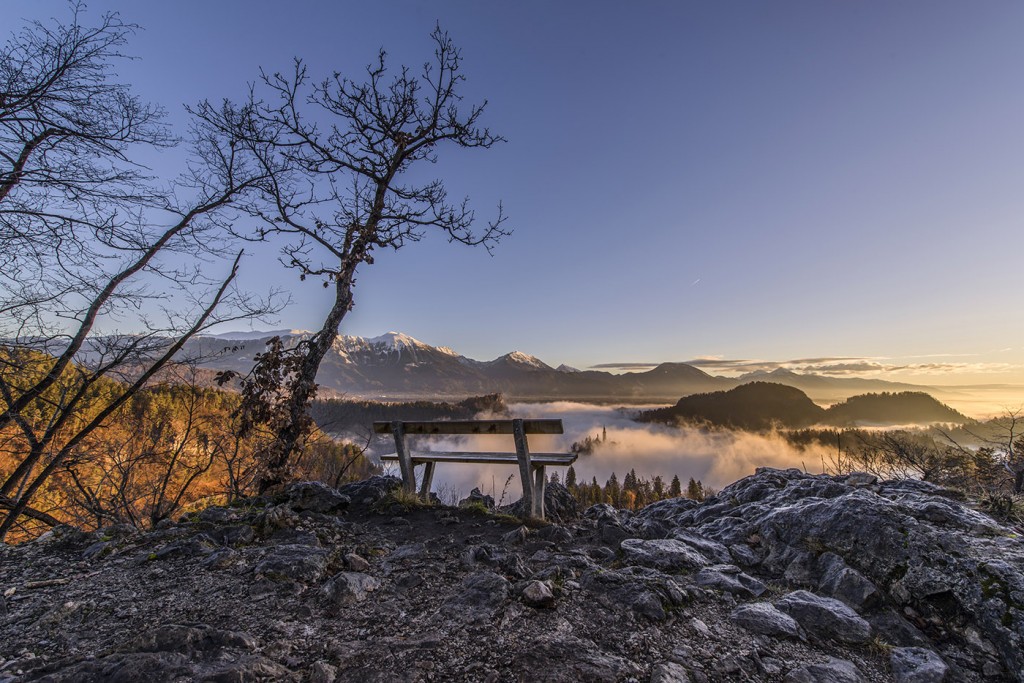 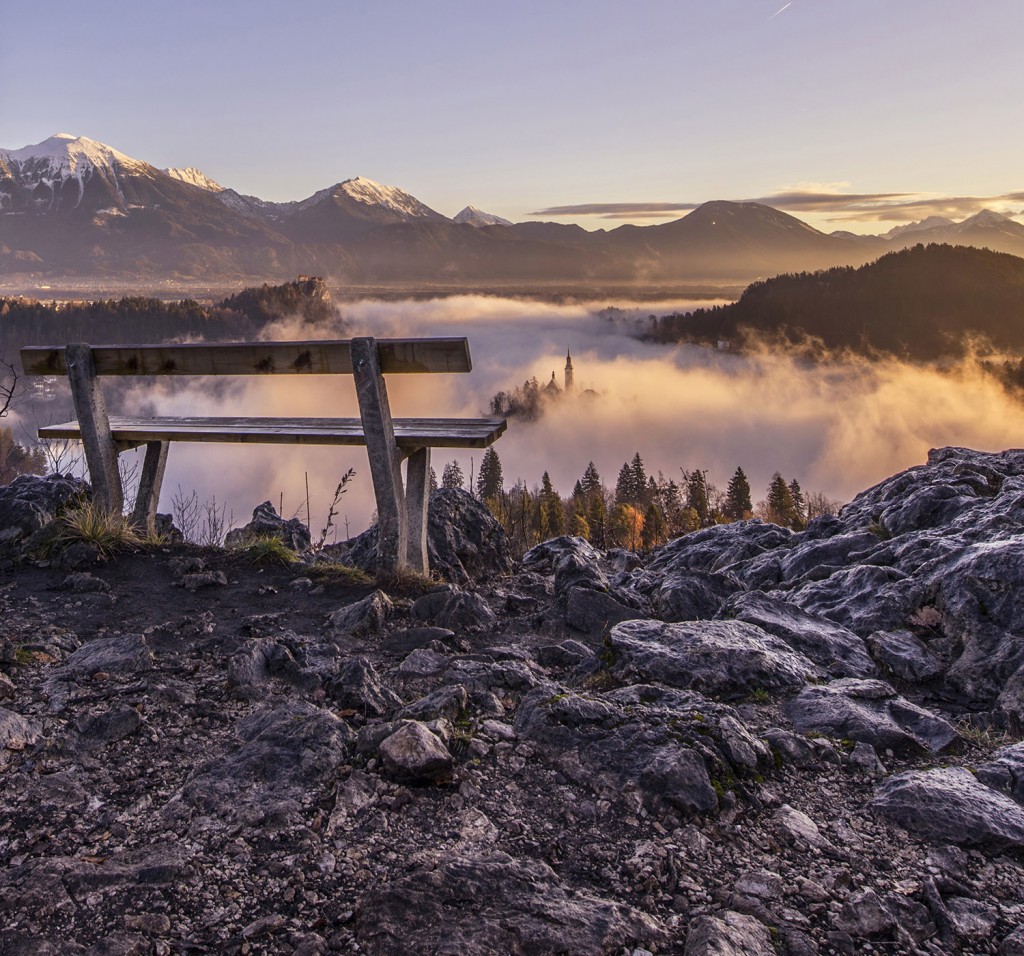 The church was now almost fully visible, just a fraction of the fog still remained. It gives the photograph a very special and unique atmosphere. 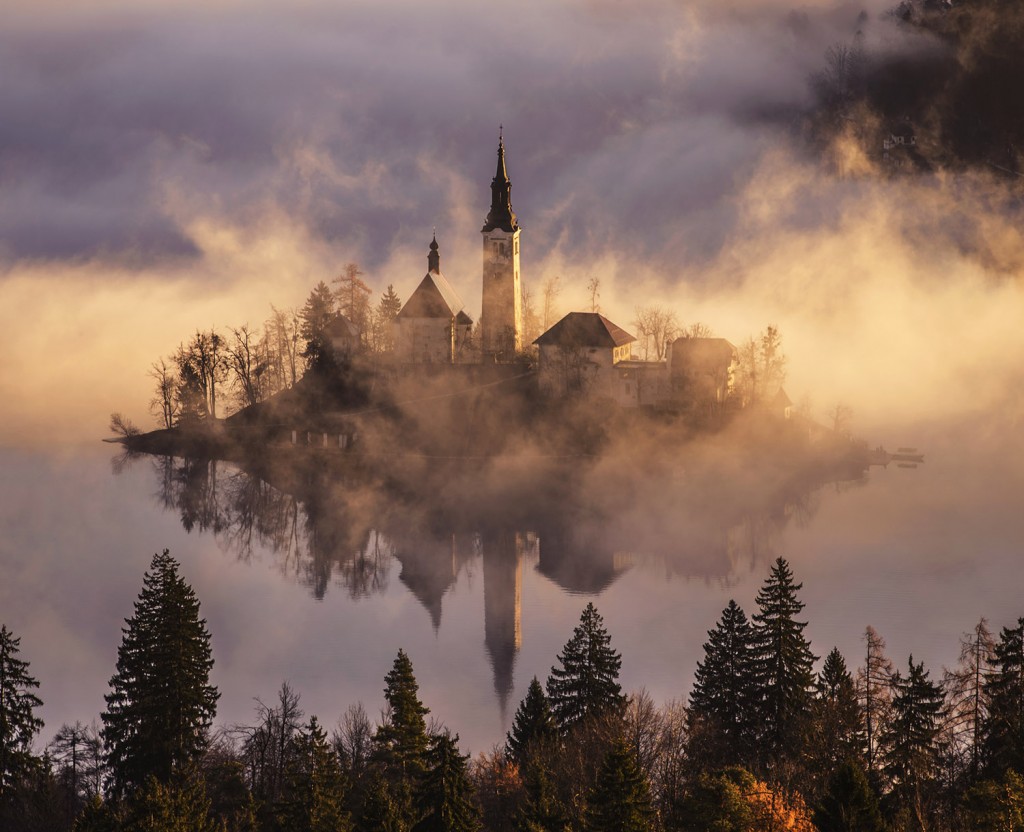 And one final close up for the end. Castle with the fog dancing around it. 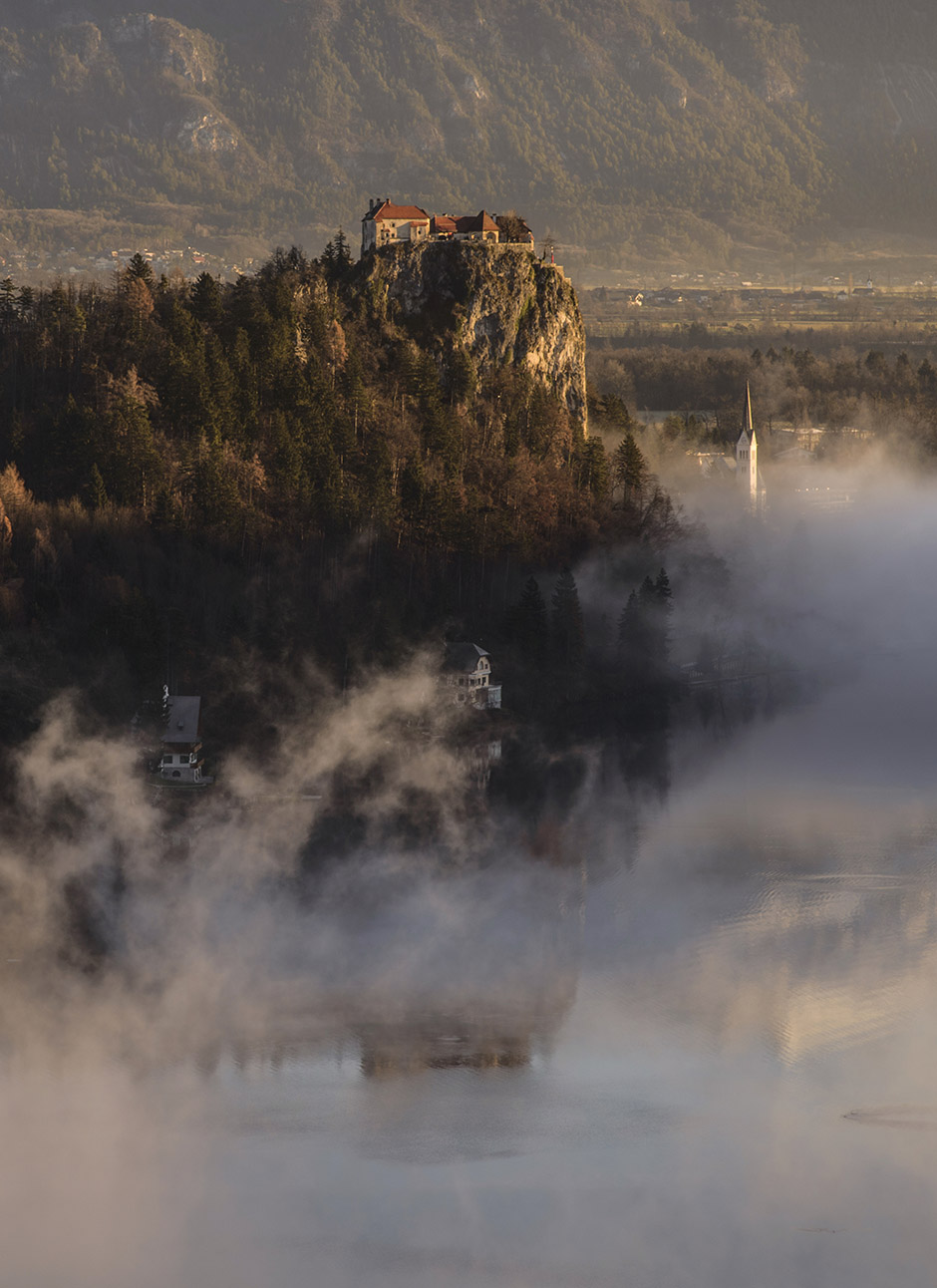 I hope you enjoyed reading about our latest photoshooting trip as much as I enjoyed all the spectacular scenes that nature offered on that beautiful morning.

That picture of the castle with fog is astonishingly beautiful. The lighting really turns it into a fantastic picture!

Tell me, does this picture fall under Public Domain, or no? I’d love to use it. If not, I completely understand!

thank you for reaching out and for the compliments. Well that depends, if it’s for personal use it’s allowed. If it’s for use on your blog, if you link back to this website and my FB Fan page it’s allowed. But if it’s for commercial use, you have to purchase it. Thank you.

DO YOU NEED BEAUTIFUL STOCK IMAGES? CHECK OUT OUR ULTIMATE PHOTO BUNDLE 2016

If you would like to download this file, then you will have to unlock it by clicking one of the options below.

+1 us on Google Plus

Purchase with paypal for

The download link will be e-mailed to your paypal e-mail.